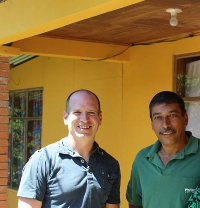 It’s Back! La Loma Returning Soon to the Coffee Hound

Sweet lemon, brown sugar, and hazelnut, these are the flavors found in our much beloved Costa Rica La Loma from the micro-lot of farmer Alfonso “Poncho” Granados. This is the flavor profile Steve fell in love with when visiting La Loma in February 2014 and that many of you came to love too when we at the Coffee Hound introduced it later that year.

Our Costa Rica La Loma direct trade was an instant hit, so much so that this past winter we sent Alfonso and his family a bonus from our 2014 profits. This was the first time they had received something like that and were greatly appreciative. The family used the bonus to buy new tires for their coffee truck and much needed items for their family. Our relationship with Alfonso and his farm is the perfect example of how direct trade relationships can help both farmer and roaster in the coffee world.

Unfortunately, this past season, La Loma encountered a couple of difficulties, including a late harvest due to rain and a less bountiful crop due to coffee rust. Although delayed, we recently received our first samples of the season, which Steve and Trace have roasted and cupped and say is as good as ever!

For all those looking forward to La Loma’s triumphant return, we are proud to announce that the delivery should be on it’s way and will be hitting our retail shelves soon!

Coffee Hound Flavors of the Fall, 2015

Coffee Hound Flavors of the Fall, 2015