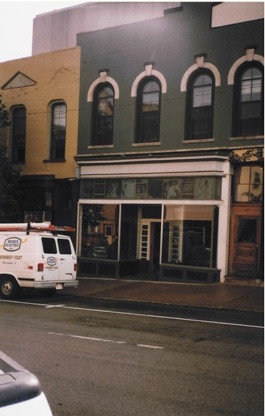 Back in March of 2002 is when the concept for Coffee Hound came to life.

Before the Hound, Steve and I both worked in the construction industry. Steve was a paint contractor and working with his brother for about ten years. I was a construction manager for a non-profit organization training young people in life skills and job training. After Steve’s brother left the painting business, Steve no longer wanted to continue alone and began thinking about a new career direction. Thoughts of going back to college, being a full time musician, and opening a breakfast/lunch restaurant were all on the table at the time. After much thought he began to focus on finding something that we could do together, so he then steered more toward the restaurant idea.

Owners, Steve and April Fritzen, cupping at the Normal shop

I think it’s pretty common knowledge that the restaurant business is pretty risky and most seem to fail. Steve began doing research on how to have a successful business, where to begin and what to do. Somewhere along the way, he ran across a website talking about how to start up an espresso based cafe ( http://www.espressobusiness.com/index.html ) Steve read through this website one day in March of 2002 and then called me at work to say, ” We are going to open a coffee shop!” Coffee Hound opened in August of 2002.

Contruction of the Bloomington shop

Although it was a short time frame from conception to fruition, there was a great deal of work in-between and ever since. Ten years later: Somewhere along the line I read most small business’s fail with in the first five years. When I think of Coffee Hound, I do think of “success,” but I also continually feel the strain to do what ever it takes to stay in business. In a nut shell, damn it, it is hard! What keeps us going? As mentioned earlier Steve and I wanted to work together and that has been a real driving force to get us through many obstacles. We are passionate about what we are doing and it is never mundane. Specialty coffee is a relatively young industry and is constantly evolving. We enjoy changing with it and try to stay on the cutting edge of what is going on. Sometimes change is difficult for both our customers and our employees, but over time we have learned to not let fear of the unknown stop us from forging ahead.

In August we kicked off our ten year anniversary with a big party, but we want to milk this out a bit further. Since the month of March is our Coffee Hound conceptual month we are going to take March Madness to a whole new level. We are rolling back the prices on all of our latte drinks to the year 2002. Move over $2.00 Tuesday, every day in March will be even better than that. You may be thinking how can it be possible to do this. Well, we need your help to make it work. Volume is the key here. Bring a friend, come more often and spread the word!