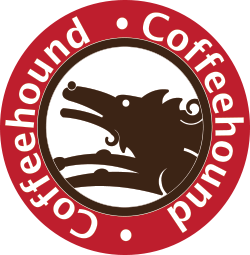 Steve and April Fritzen, the owners of the Coffee Hound, opened the shop in 2002. Their goal was to bring high quality coffee to Bloomington. After expanding their business to include a Normal location, they have succeeded becoming a staple to Bloomington Normal by serving delicious and exceptional coffee. The Coffee Hound’s presence in the community goes far beyond just giving customers’ their early morning boosts. Steve and April have expanded their business to include locally roasting their own beans. Steve specially orders green beans and then roasts it in-house with the assistance of Michael Carmody and Anna Barnett. Hound coffee can now be found around town at places like Station 220 and the Lean Body Bootcamp, and Bloomington Cycle & Fitness!

After ten years, the Hound is updating it’s hound dog logo to be more modern! A ten year anniversary shirt was designed by the Coffee Hound’s very own Michael Carmody and Kaleigh Post! It features “Home is where the Hound” is in front of Downtown Bloomington’s cityscape. What a better way to celebrate the Hound’s tenth birthday than with a makeover!

Stop into the Hound today to pick one up or order online at the Hound’s new online store!