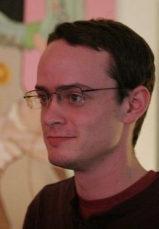 Steve Fritzen, president of Coffee Hound, crafted hot chocolates as well as mochas, which ran on discount for the evening, in addition to the chocoalte bakery items. The turn out was outstanding.

“I haven’t seen this many people in the shop on a Friday night since we first opened,” Steve said. “I think the weather was a big factor, but this was incredible for business.”

Ralph and Linda Lehmann were among the first few patrons to enjoy the chocolate beverages, and said they looked forward to offerings from the other downtown businesses. Linda said the weather and the mood of the evening were perfect for a night out followed by a restful evening at home.

“I think it’s a good way to get exposure downtown,” Mrs. Lehmann said. “It’s nice to see people walking around with such a friendly atmosphere.”

In addition to the chocolate macaroons, mexican shortbread and other bakery items, Anna Barnett offered her home-made marshmallows to patrons. Some topped their drinks with the pillow-like treats while others ate them a la carte.

Making the marshmallows was quite easy, and Anna said after she first made them, she wanted to try different kinds including peppermint.

The Coffee Hound’s superb mochas and hot chocolates are available year round at both Bloomington and Normal locations, and are made from Omahene chocolate imported from Ghana.

The Spaceship Has Landed

The Spaceship Has Landed